Part of the Hallmarks of Aging series.

The cells in our bodies are constantly churning out proteins and other structures, built according to the blueprints contained in their DNA, which are crucial to supporting those cells’ functions. And while in each cell most of the information contained in its DNA will be ignored, if an area of the genome important to the cell’s function is damaged or develops mutations, the cell may produce misshapen proteins or simply stop functioning altogether. The effects of misshapen proteins can range from useless to actively harmful, as when neurons in a brain with Alzheimer’s disease produce excessive amounts of the neurotoxic protein amyloid beta.

A few dysfunctional cells here and there don’t pose much of a problem, but as more and more cells in a tissue accumulate damage over time, the health of the entire tissue or organ may be compromised. The body’s normal way of dealing with such cells is to remove them through a type of programmed self-destruction called apoptosis, making way for new cells. Some cells, however, fail to die and enter a state of senescence, where they are incapable of replicating but are still left to take up space in the tissue.

But especially dangerous is the case of a cell with damaged DNA that doesn’t enter either apoptosis or senescence: damage drives mutation rate up each time the cell replicates, and if a mutation provides a survival advantage or switches off the cell’s protective mechanisms against tumor formation, this can eventually lead to cancer. Cells that divide frequently, such as skin or lung cells, are most susceptible to this danger.

There are many sources of DNA damage outside the body. UV light can cause certain bases to join together, as well as forming harmful free radicals. Radiation, from x-rays or gamma rays for instance, can actually cause strands of DNA to break, and industrial chemicals and tobacco smoke both contain polycyclic aromatic hydrocarbons that can bind to DNA and disrupt its structure. Various agents used in chemotherapy help to kill cancer, but also cause DNA damage and compromise healthy cells–hence the severe and unpleasant side effects. But even if you lived in a bubble, you would still be susceptible to DNA damage caused by the body’s own processes.

Fortunately, our cells have evolved a complex network of repair mechanisms that can deal with most of these damages. Certain enzymes are able to recognize and directly reverse many modifications of base pairs, or rejoin broken strands of DNA. However, this process is far from perfect, and sometimes DNA damage goes unrepaired. This can cause the replication machinery to misread the information from the damaged strand and insert the wrong base into the newly synthesized strand, et voila, a mutation! Since this mutation would be carried through each daughter cell, preventing such errors is a high priority for cells. As a result there are checks on DNA integrity both before and after replication is finished. 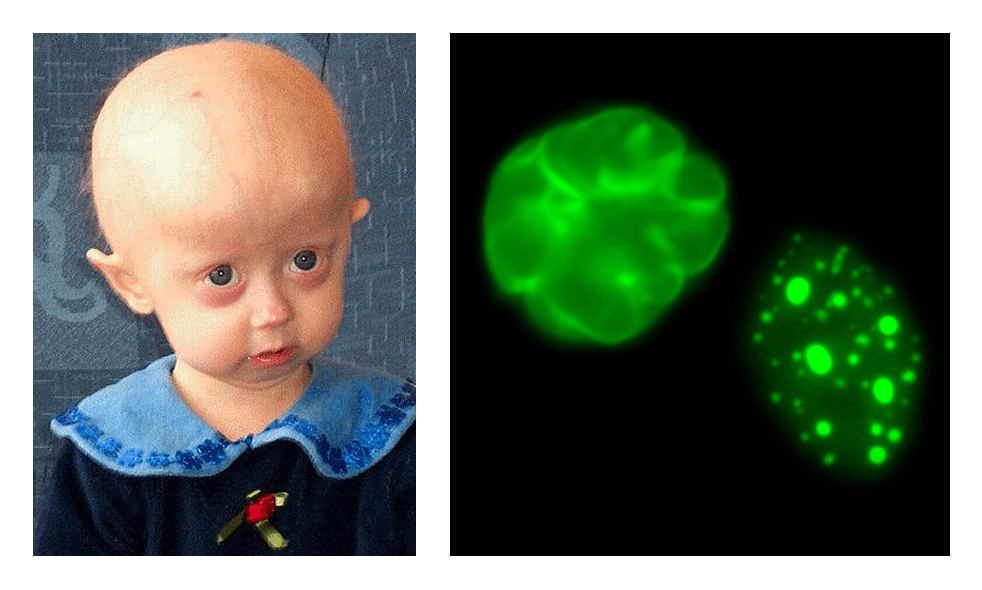 When DNA repair is impaired

Many aging disorders are linked with faulty DNA repair mechanisms, including Alzheimer’s, Parkinson’s, and Lou Gehrig’s disease (ALS), but perhaps the most striking example can be seen in progerias. Progerias are congenital disorders that result in extreme premature aging and shortened lifespan, the most famous of which is Hutchinson-Gilford progeria syndrome (HGPS). This disease causes a defect in a protein that forms part of the structural support of the nucleus, and which is also responsible for maintaining certain proteins crucial to DNA repair processes. As a result, individuals with HGPS only live until their early 20s and suffer from atherosclerosis, stiff joints, hair loss and wrinkled skin, among other problems.

How can genomic instability be prevented?

Our bodies may have evolved an impressive variety of damage repair mechanisms, but with increasing exposure to damage-causing agents in the environment and the damages caused by our own internal processes, compounded with the declining effectiveness of our protective mechanisms over time, DNA damage and mutations are bound to accumulate as we age. Some evidence suggests that caloric restriction may mitigate these effects. However, since no drugs yet exist that will prevent or repair DNA damage, all we can do at the moment is try our best to avoid harmful agents like excessive sun exposure and smoking.

Next up, we’ll take a long look at short telomeres.

Newer PostWhen copy-paste attacks: A possible answer to the mystery of Alzheimer’s disease
Older PostDo aging circadian clocks have tricks up their sleeves?