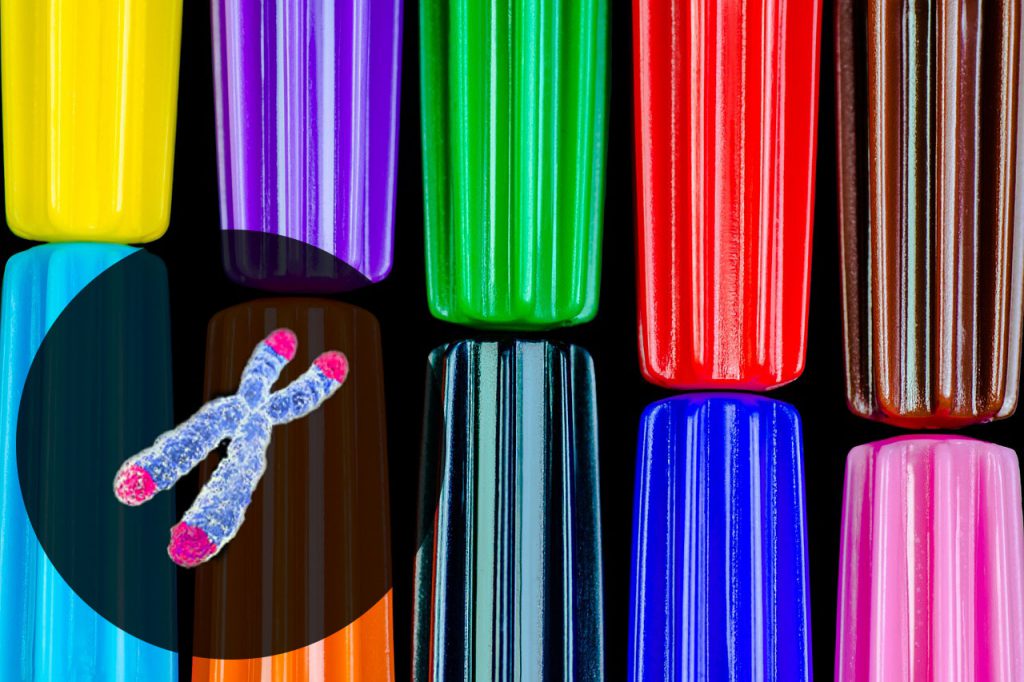 Part of the Hallmarks of Aging series.

The chromosomes that store your genetic information are capped at each end by a telomere–a specific DNA sequence, repeated thousands of times. This sequence serves two purposes: it protects the coding regions of the chromosomes from damage, and it provides a “clock” that measures the age of the cell.

The protective function is relatively straightforward.

DNA’s building blocks are made to bond with each other, which as a side effect makes them good at bonding with other molecules. This is dangerous–two chromosomes could bond together, or a chromosome could bond to something else entirely. Cells prevent this by placing a protein “cap” on the end of chromosomes, kind of like a cap on a pen. But since this cap bonds to DNA just like an opposing DNA strand, using the base pairs, the ends of chromosomes must be identical: otherwise each chromosome would need its own cap, and a mutation in the end of the gene would leave a chromosome vulnerable to fraying. Having a sequence that does nothing but signal “this is the end of a chromosome” avoids this problem.

Additionally, DNA damage can spontaneously change one base pair to another. This is more likely on the exposed ends of a chromosome than in the protected middle. Damage in coding regions is hard to detect and fix, because the repair enzyme needs to “know” what the original base pair was. However, damage in a non-coding region is not only inherently lower impact, but in the case of a repeating sequence, easier to fix. You only need a single enzyme that says, in essence, “is this near the end of a chromosome? Does it look close to the telomere sequence? Make it the telomere sequence.”

And due to a quirk of the structure of DNA, every time a chromosome is copied, one copy is a little shorter than the parent. If a coding region was shortened, it could ruin the resulting protein. Telomeres act as “cruft” that can be removed without affecting function.

The “clock” function of telomeres, on the other hand, is somewhat more complicated.

Because they consist of repeats, it is easy to lengthen telomeres after they’re shortened by cell division with an enzyme called telomerase. But in all cells except sperm, egg and stem cells, the lengthening process either does not occur or replaces less than what was lost. In the end, telomeres become and stay shorter with every cell division. Once a telomere shrinks to a certain size, its cell will no longer divide and eventually enters cellular senescence.

This causes substantial of negative consequences. As cells die off due to damage or disease, there are no cells to replace them, leading to organ degeneration. Furthermore, long telomeres predict increased lifespan. So why not just keep dividing indefinitely?

While there are no clear answers to this question, one story is that a limit on cell division prevents cancer. Cancer cells divide many more times than regular cells, and a mechanism that inhibits that runaway division can stop cancer before it becomes a problem. Indeed, breaking the inhibition against dividing when telomeres are short appears to play a key role in a cell becoming malignant.

What can we do?

Many lifestyle choices associated with good health (healthy diet, exercise, meditation, etc) are also associated with not only long telomeres, but lengthened telomeres. Lengthening can be detected in as little as six weeks after a behavioral change.

Researchers are also investigating several experimental treatments to extend telomeres. These include:

Want more? You can find a selection of articles related to this hallmark here.

(1) The quirk: DNA strands are directional: one end is the 3` end, the other 5`. The two strands in a double helix are antiparallel. DNA replication enzymes (polymerases) can only create strands from 5` to 3`. When a chromosome divides, the two strands don’t unzip entirely and wait to be copied. That would leave a lot of bonding sites that could be attacked by free radicals. Instead, the strands separate just a bit and are immediately copied. This separation, known as a bubble, expands along the length of the original DNA strand.

This presents no problem for the newly created 5` -> 3` strand (the leading strand). However, the 3`->5` copy, known as the lagging strand, has a problem: the newly exposed base pairs are at the start of the DNA strand, not the end. The solution is to start a new copy from a new origin, and then bond the fragments using a separate enzyme, DNA ligase. These fragments are known as Okazaki fragments. (Note that there are actually multiple bubbles when copying a chromosome, to save time, so 5`->3’ strands end up with multiple fragments bound together as well. However Okazaki fragments are short, ~100-200 nucleotides, while 5`->3` fragments are 30,000-3000,000 base pairs long.)

This works until you reach the very start of the lagging strand. For reasons that are not fully understood, the RNA primer that initiates a new fragment does not attach on the absolute 3` end of the strand, but 70-100 pairs in. This means that every time you copy a chromosome, one of the daughter chromosomes is 70-100 base pairs shorter than its mother or sister.

It’s important to note that this mechanical difficulty is not the answer to why we have cellular senescence, in an evolutionary sense. If it were evolutionarily advantageous to not shorten telomeres with every replication, evolution would have found a workaround. In fact we already know what this workaround is: telomerase, which keeps germ and stem cells immortal. Furthermore, short telomeres are not a mechanical inhibition to replication; we have specific genes (p53 and pRb, both associated with cancer) that inhibit cellular replication in the presence of short telomeres, and if those are disabled replication continues. It is more accurate to think of telomeres as a happy accident that evolution has exploited to create a cellular timer.

(2) This is a simplification of the existing data which, like most of biology, is contradictory. Some evidence suggests shorter telomeres and inactive telomerase increase the risk of cancer in certain circumstances. Most evidence indicates longer telomeres lead to longer lives, but not all.